One issue that has remain malignant, and ever present in the socio-political sphere of every Nigerian is the cancerous issue of Electric Power, running right through length and breath of the Power Industry ecosystem. Even after over half a century, post independence, no solution is still in sight.

There are questions ranging from Political will, policy failures, technical capability, greed, or simply lack of definite and purposeful sense of duty, systemic corruption, coupled with sabotage from a set of people (which has now been known by loose term- cabals).

Whichever position one is tempted to take, the direct and visible result is that the Power Sector has simply remained moribund, and nothing good seems to be able to come out of its Rome. Barring the 20years period from 1980 to 1999 where successive governments have made little or no investment in the sector, over $1.2bn has been pumped annually into the sector since the return of democracy.

The globally acclaimed and daring privatization of the Power sector was rolled out in 2001 by the Chief Olusegun Obasanjo administration, which succeeded in breaking down the grossly corrupt and inefficient monopolist behemoth Nigerian Electric Power Authority (NEPA) in 18 different companies – 11 Distribution companies (Privatized), 1 Transmission company(ownership retained by government), and 6 Power generation companies(also privatized).

Another “independent” body, Nigeria Electricity Regulatory Commission, was setup to serve as an oversight on the young and budding industry.

As wonderful as the setup is, what is worrisome is the premise that the power generation policy was based on. It is unfortunate that the Power Ministry, while drawing the roadmap for the Power Industry, based its assumptions solely on the use of Gas, which of course Nigeria has in abundance, but we are not limited to.

No matter how beautiful the design of a car is, if the fuel grade is used, the car would not perform optimally. The Roadmap is beautiful, no doubt, but for a Nation as blessed and rich in Mineral resources to put all its hope, plan and future, on one source, reeks of lack of vision, or sincerity of purpose.

Let us examine the industry, via global standards and practice, their power generation fuel mix and percentage contribution to the mix. We will be using United States of America, Brazil, United Kingdom, South Africa, India, Russia, Germany, Canada, Australia and China. 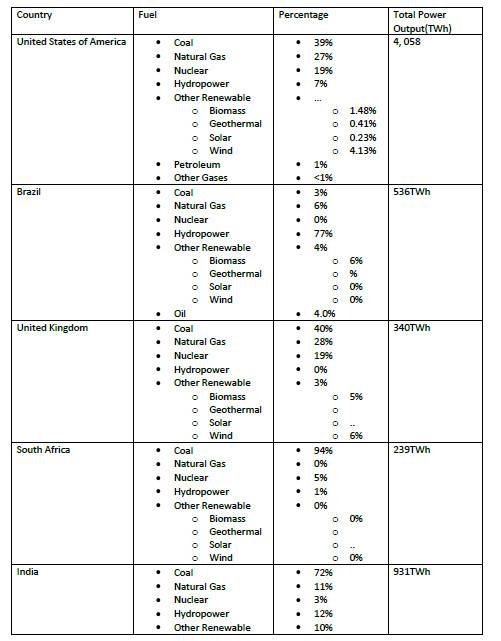 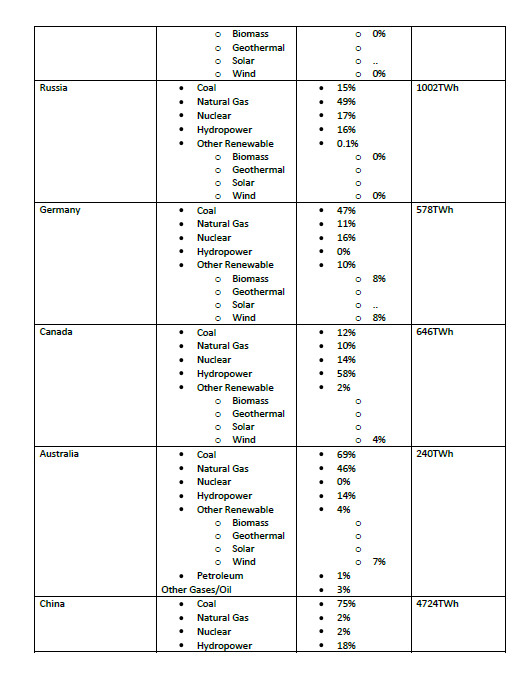 Please take a minute to study the top 20 electric power generating countries belowTable 1: 2012 Data for each of the countries above. 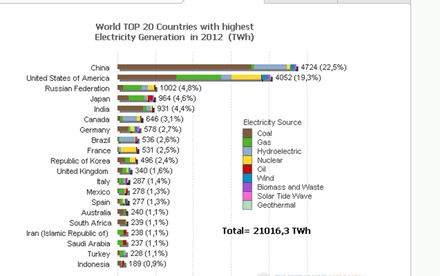 Take a moment to study Table 1 carefully, and you will see where our problem comes from clearly.

One prominent feature of these countries is their dependence largely on, 1) Coal, and 2)Hydropower.

Except for Russia, who generates above 40% from Gas, no other country is solely dependent on one fuel source, or even uses Gas as their main source for power generation.

This raises lot of questions regarding the intent, and seriousness of our policy makers to bring a lasting solution to the electric power problem of the nation.

Natural Gas, as source of fuel for power generation is apparently a new and developing technology, while the technology for Power Generation from coal has been around for centuries, and Is evolving to meet environmental issues to become cleaner, it is also on record, that very much like the Natural gas that we are touting today, coal is a very much abundant resource that we are blessed with in Nigeria, and which has gone virtually and practically untouched for reasons best known to the Federal Government.

One key factor, however, in the effort to shove Natural Gas down our throat, is the multinational companies that operate in the Oil & Gas sector. Major Oil Giants like Shell, Chevron, Exxon Mobil and Agip, keep feeding the Nigerian Federal Government with reports that suggest that the whole world is dependent on Gas, and that it is a cleaner form of fuel compared to Coal. Sadly, Nigeria is under servitude to these “cabal”.

Unfortunately, these same set of companies do easily sponsor Civil Society organizations to carry this campaigns to town, just to satisfy their selfish interests.

Given, however, that we MUST go with Gas, why have not partnered the Russians in setting up a similar system, or buying their technology, so we could learn from their Experience? WE unfortunately go to people like General Electric, who have had the need to first convert their turbines to suit Natural Gas as fuel.

Is there anything wrong with buying established technologies for Coal Power Generation? Is it not foolishness, or hypocrisy??? For the cost of turbine conversion to utilize gas for a Nigerian company, what is the equivalent cost for a coal powered plant? Have we considered how much it will take to lay gas pipelines across Nigeria to locations where we have gas powered plants presently? What will the continuous volatility in the Niger Delta mean for this industry? The disparity between the local industry prices for gas and the international would remain a bottle neck until it is removed. What would the resultant increase in gas price in the local market mean to an average man on the street? What policies have we put in place for other sources of fuel for power generation to be utilized? Are we still making promises to look into this?

As long as the Power Roadmap remained shortsighted and jaundiced, there definitely is no hope for a miracle in the power sector for the nearest future.

EDITORIAL: The Introduction Of An “Independent Metering Service Provider”, The Good, The Bad And The Untold

#EDITORIAL: Estimated Billing- To Criminalize Or Not?

Editorial: Fate of the Electric Power Sector in the New Nigeria

Pay Your Debts Or Your Country Would Be Disconnected – @tundefashola...

Dan - July 11, 2018
0
The Federal Government has called on international customers who receive electricity from Nigeria to either pay their bills or be disconnected.PowerUp News reports that...

@Ikejaelectric Told Me To Go Uproot A Pole Somewhere Else… Angry...

Press Release: I Am More Concerned With Putting Square Pegs In...

OPINION: The Eligible Customers Policy – Why We Have Noto Seen...

ABOUT US
PowerUp News is the media platform of PowerUp Nigeria, an electricity consumer rights advocacy and education organization. Our mission is to remain the Voice of the Power Sector.
Contact us: editor@powerupng.com
FOLLOW US
© PowerUp Nigeria 2018
MORE STORIES